The police in Lagos have arrested a 23-year-old woman Deborah Nwachukwu for allegedly stealing a Toyota Sports Utility Vehicle (SUV), two expensive mobile phones, cash and other valuables from her sex partner.

Nwachukwu, a resident of 19, Irewale Street, Ipade was alleged to have committed the offence against one Patrick on October 20, at MKO Street, off Toyin Street, Ikeja.

It was gathered that the duo had fixed an appointment for N20,000 after a chance meeting at the Ikeja Shopping Mall. 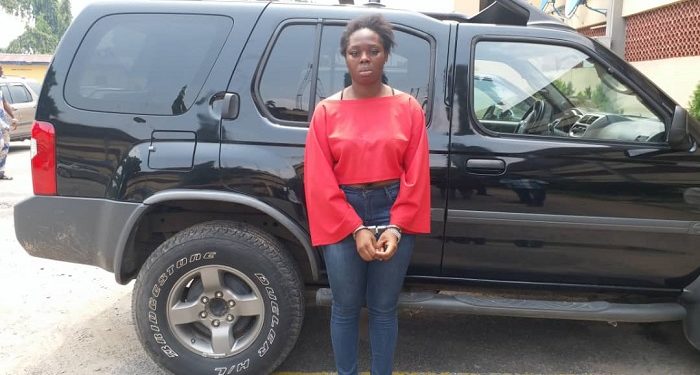 Patrick, the police said, claimed to have required both cleaning and sexual services from Nwachukwu for a fee of N20,000 which the woman accepted.

She was said to have honoured their agreement and around 2am when the man was sleeping, Nwachukwu allegedly fled with his valuables including the phones worth N1,000,000, his wristwatch and perfume.

The suspect was said to have locked the man inside his room before fleeing.

Spokesman Bala Elkana, a Deputy Superintendent of Police (DSP) said detectives led by Chief Superintendent (CSP) Gbenga Ogunsaki arrested the woman and recovered all stolen items, adding that she has been charged to court.

He said, “One Olayemi Agbamuche reported at Bariga Police Station that he was robbed of his red bajaj motorcycle at Abeokuta Street by four hoodlums armed with axe and sword. Detectives from Bariga Division swung into action and arrested one of the suspects, Folarin Moses, 23.

“He was released from prison recently after serving a jail term for a similar offense. An effort is being made to arrest his other accomplices and to recover the stolen motorcycle

We do not share your personal details with anyone.
Compare